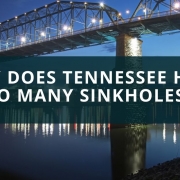 As I go about researching for sinkhole information in various states, I learned a bit about the geology as well as the geography of the regions I am writing about. I would be willing to bet that most people outside of the South-Eastern United States do not realize that Tennessee is riddled with caves. This was definitely new information to me. Tennessee extends more longitudinally than latitudinally (meaning, it is much wider than higher – more East-West than North-South).

Since that region of the US contains a major North/South mountain chain (the Appalachians); and the state extends to the Mississippi River floodplains – the topography and environment reflects a lot of change as you head east to west. This has some impact on why and where sinkholes develop in the state.

Cave topology is known as “Karst” in geologic circles. This is in reference to the Kras region of Slovenia where the terrain contains numerous limestone rock exposures and sinkholes as well as caves. The processes that create this sort of land form are the same as what causes sinkholes, and it is no surprise that where there are a lot of caves, there are a lot of sinkholes.

The following graphics are created from publicly available GIS data downloaded from various Tennessee websites (particularly, Tennessee Landforms). The illustration shows that the existence of sinkholes outside of the carbonate bedrock is nearly nonexistent and probably caused by other activities than bedrock failure (speculating here, to be clear. This is not a scientific paper so I get to do that).

The primary cause of sinkhole development isn’t so much a process as it is the existence of minerals that react with water. You can’t have a pizza without the crust, right? This is very similar to Florida where the presence of carbonate (limestone) and dolomite bedrock coincides with the existence of sinkholes.

One primary difference between Florida and Tennessee is that Florida’s topsoil is looser (I’m guessing sandier as well) than Tennessee’s so it breaks apart quicker. Tennessee’s topsoil is tighter, contains more clay, and can handle more weight before it collapses. This is why there are fewer sudden “cover collapse” sinkholes found in this state.

In addition to water-soluble minerals, rainfall must also be plentiful. Without water, there is no mechanism for breaking down the bedrock. If it was on the surface, the rocks are subject to weathering by wind and other mechanisms of erosion. Isolated from surface processes, the primary mechanism for bedrock failure is dissolution by water.

If you compare the sinkhole locations in Tennessee map 1 with the geology in map 2 of Tennessee below, you should come to the conclusion which is confirmed in map 3 below titled “Tennessee Sinkholes on Geology”. It almost makes to sense to do further analysis, but of course that would be pretty boring.

Without going through a whole land-type analysis, it is abundantly clear that the type of land where sinkholes are most common fall within the Sedimentary/Carbonate areas. But, if you want the numbers, here you go:

One of the ways that maps make information so easy to digest is a type of map called a Chloropleth. From our favorite source of mostly correct but still unscientific information Wikipedia: “A Chloropleth is a type of statistical thematic map that uses intensity of color to correspond with an aggregate summary of a geographic characteristic within spatial enumeration units, such as population density or per-capita income.” This takes the number of features (in this case, sinkholes) and tallies them according to an area (here, counties).

Again, GIS comes to the rescue and by dividing (Number of Sinkholes per county)/(Square miles of county) you get a figure that is far more useful in determining sinkhole risk. There are some counties in Tennessee where that number can be over 8 sinkholes per mile. And surprise, it is not the county with the highest number of sinkholes.

Sinkholes Per Sq Mile Per County

Sinkholes per County and Area:

Sinkhole damage tends to be costly. In one instance, a sinkhole swallowed one side of a road and it was estimated that it would cost over $100k to fix it. This type of repair isn’t a simple fill-an-pave over operation. Measures need to be implemented that prevent the sinkhole from growing. Nationwide, sinkholes cause about $300 million in damages.

This sort of analysis likely has an effect on insurance premiums. In 2013, there was a case that indicated that home-owners insurance is not inclusive of earth movement (such as when the ground falls out from under you). It is possible to get coverage, but in Tennessee, it is not mandatory.

It is required that insurers offer it, but not for consumers to buy it. It can cost a fair amount as well. Insurance provider Progressive states that “Percentage deductibles may range from 1% up to 10% of your dwelling’s coverage limit. Suppose you carry $300,000 in coverage and have a 10% deductible. Your insurance company may pay for a covered sinkhole loss up to your policy limits, less the $30,000 from your deductible.“ And the danger appears to be increasing. As mentioned in previous articles, sinkholes can be caused by human activity.

So, whether it is altering the flow of groundwater that creates new cavities, groundwater pumping, or construction expanding into areas that are prone to sinkholes, our interface with this hazard is increasing. Some might ask if climate change has anything to do with this and I would venture that changes in rainfall in this area of the country might be a secondary influence. In parts of the country where permafrost (specifically, Alaska) has been a stable environmental feature, climate change is causing the ground to thaw which is causing instability. For Tennessee, I don’t think that is a big factor.

In closing, I would say that every part of the country has it’s risks. In the northeast (where I am from), our risks are more weather related. We tend to get crippling winters on occasion (just ask any beantowner that lived through the winter of 2015…108 inches of snow!).

Midwest has hailstorms and tornadoes. West coast has earthquakes, wildfires, and mudslides. Florida? Alligators and the Westboro Baptist Church.

So it’s a dynamic country, and fortunately we have the means to evaluate the conditions where we live. Our biggest problem is that we are running out of places to live that don’t have an elevated risk factor. But that never stopped us before. Look at how populated our coasts are. You know, places that get flooded and hit by hurricanes! 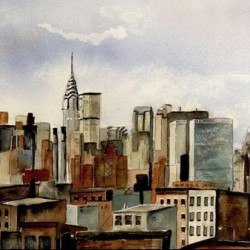 Christopher Bride
Christopher Bride is a GIS Analyst in Cohoes, NY. He received his MS in Geographic Information Science from Lehman College (City University of New York) in the Bronx, NY., and a BA in Environmental Policy & Management from Hunter College (also City University of New York) in Manhattan, NY. Research was a primary duty for his degrees. He won the Miriam & Saul Cohen Prize for Excellence in Geographic Research for his undergraduate capstone “A Triple Bottom Line Analyses of Seven Food Policy Documents” in 2011. While a graduate student, he was hired as a GIS Data Researcher for the Lehman College-sponsored website https://www.lehman.edu/community-connect/links.php where he honed in on data research for GIS as a primary skill.

His professional interests are environmental management/conservation and working with environmental data. He was a GIS Technician on NYC’s 2015 tree census and QA’d half of the data himself (a dataset with over 660k datapoints). He has also been a NYC photographer for the real estate website Propertyshark.com since 2005.

When not working, he likes to kayak, fly drones, garden, cook, and raise two daughters with his wife in upstate New York. He also has a previous career as a musician and audio engineer and still loves to be involved, though in a less than professional capacity. He has been playing piano since age 5.

Reconstruction along for SR 77 – Washington County Sinkhole
Scroll to top